Community leaders and Denver DSA members took over the Colorado State Capitol complex Wednesday to demand immediate action from Gov. Jared Polis to prevent mass displacement in the coming weeks and months, as federal unemployment dries up and eviction moratoriums are set to expire.

“Without immediate action, hundreds of thousands of renters are going to get swept away by a tsunami of evictions across our state, adding a housing crisis on top of our ongoing public health crisis and civil unrest,” said Aurora Councilmember Juan Marcano. “Unprecedented times call for unprecedented action. This can be prevented with bold leadership by our governor—but only if he has the will to do it.”

Denver DSA hosted a meal service in the afternoon with Denver Homeless Out Loud, Colorado Jobs With Justice and the Colorado Poor People’s Campaign. The groups set up dozens of tents across the Capitol lawn to symbolize the 400,000 Coloradans who are imminently vulnerable to eviction in the absence of any meaningful steps to keep communities housed.

“So many of us have already lost so much,” said Denver DSA labor organizer Mariah Wood, who was laid off because of COVID-19. “I had to vacate my apartment back in May because I hadn’t received my unemployment for close to two months, and had no hope of catching up on the rent I owed. I had no idea when the eviction moratorium would expire, and kept getting notices from my landlord. I was desperate, and had to throw out everything that wouldn’t fit in the back seat of my car. Hundreds of thousands of people have been laid off due to the virus, and the state is being forced to close businesses again due to its resurgence. More and more people are going to be forced to make the same decision I did.”

We categorically reject any city budget that continues to entertain massive vanity projects while simultaneously turning a blind eye to its unhoused residents. As unemployment and homelessness continue to spike, we will continue fighting to cancel rent and evictions. Solidarity, reinvestment, and a people-centered approach to the pressing needs of our communities are the way forward, toward true housing security for all.

“As unprecedented amounts of federal dollars flow toward relief from this global pandemic, our Governor and Mayor have failed to meaningfully address the now exponentially exacerbated housing crisis,” said Denver City Councilmember Candi CdeBaca. “In Denver, we know only a fraction of people in need are receiving support. Over 100,000 Denver residents face months of unpaid rent, looming evictions, and nightly protests. Unrest is rising. The city cannot rest, elected officials cannot rest, until the people are also able to rest comfortably in their beds. We need an immediate cancellation of rents and mortgages now.”

This Friday, June 19, communities across the country will celebrate Emancipation Day, more commonly known as Juneteenth. On this day in 1865, Union soldiers landed in Galveston, TX and brought the news of the Emancipation Proclamation to Black enslaved people in Texas, some of the last people to be freed before the passage of the 13th Amendment. You can read more about the history of this day here and read about why socialists call for Juneteenth to be a national holiday.

In the wake of the murders of George Floyd, Breonna Taylor, and so many others at the hands of the police and the subsequent uprising demanding an end to anti-Black and Brown policies and growing demands to abolish the police, this year’s celebrations and actions take on added importance. At the national level, DSA has endorsed the Weekend of Action by SixNineteen, a network of Black-led organizations.

In this spirit, the Steering Committee of Denver DSA strongly encourages you to attend or participate in some of the many Juneteenth events happening across the metro area this weekend, particularly the Freedom Day Party on Saturday, 6/20. We have compiled a list here, which is being updated constantly. Some important events include:

This is perhaps the most meaningful Juneteenth weekend of our generation. Please take time this weekend to attend one or more of these events and continue the struggle to protect and uplift Black Lives, Black Trans Lives, Black Indigeonous Lives, and Black Immigrant Lives. None of us are free until we are all free!

Part of a larger coalition of unions representing more than 80,000 Kaiser hospital workers has authorized a walkout that would begin in October.

Learn how to support your local healthcare professionals by getting in contact with the healthcare committee! 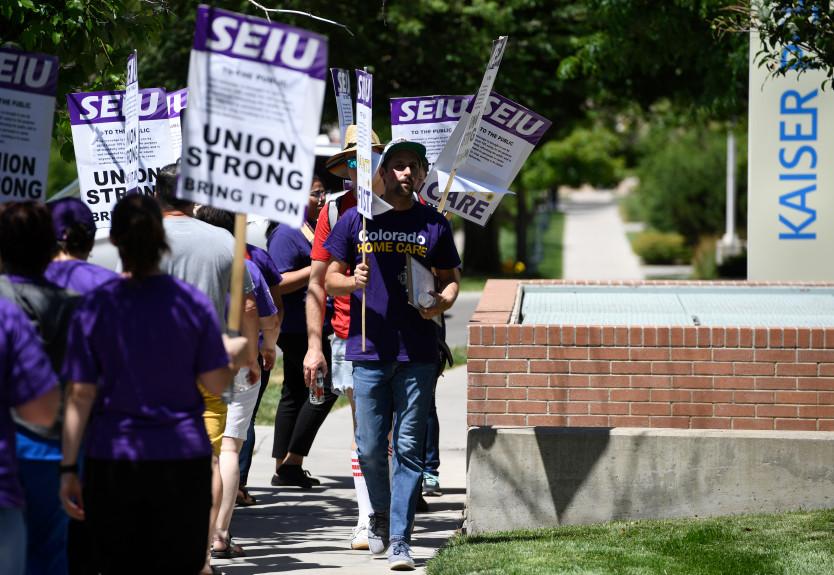 Members of our chapter will be knocking doors, calling voters and writing postcards for our endorsed candidates every week in order to get them elected in November. If you’d like to get involved contact electoral.committee@denverdsa.org, or donate at the following websites if you are unable to volunteer:

Our next meeting is at Whittier Cafe (1710 E 25th Ave) at 6:30pm on September 12th. No previous electoral politics experience or knowledge is required, we are always happy to answer questions! If you’re new to electoral politics (or just the committee), if you’d like to get involved before the meeting or if you can’t make the meeting please feel free to contact the committee at the email address above and we can set up a time to chat!

Over the summer we’ve:

To get involved with Tech, contact info@denverdsa.org. To join slack, you can forward your membership receipt from national to that address as well.

Denver, CO — On Thursday, August 23, a diverse coalition of labor unions and community organizations officially launched the “$15 for DIA” campaign. Led by UNITE HERE Local 23, this citywide ballot measure would raise the minimum wage for Denver International Airport workers to $15 an hour. The Denver chapter of the Democratic Socialists of America (DSA), the Denver Area Labor Federation, the Colorado Immigrant Rights Coalition, Democratic nominee for SD 34 Julie Gonzales, and many more have endorsed the initiative.

Denver DSA issued the following statement in response to the campaign kickoff:

The publicly-owned Denver International Airport generates over $26 billion annually. Another year of record growth is forecast for 2018. The airlines are reaping profits for their shareholders and executives like never before. Yet, the workers who actually produce this wealth are being left behind.

Thousands of Colorado families — predominantly immigrants and people of color — are living in poverty amid this prosperity. Some longtime employees at companies like United still make less than $12 an hour after 20 years on the job. Many DIA workers earn no more than the current state minimum wage of $10.20 an hour. Meanwhile, across the airport, management continues to fight tooth and nail to deny workers’ right to organize and bargain collectively.

This situation is unacceptable. That’s why Denver DSA has endorsed a citywide ballot initiative to raise the minimum wage for all DIA workers to $15. Alongside our coalition partners, we have already begun talking to voters and gathering the initial signatures to get the question on the May 2019 ballot.

It’s time ordinary people in Colorado fought back against the greed of corporations, developers, and their political lackeys. Join us and build worker power at DIA! Check out the Denver DSA Facebook page to find opportunities to volunteer.

Denver DSA is the local chapter of the Democratic Socialists of America, the largest socialist organization in the United States. We believe both the economy should be democratically owned and controlled to meet the needs of working people, not make profits for a few. We are an activist organization, not a party; through community and campus-based based chapters, DSA is building a mass movement for radical social change and establishing an openly socialist presence in American politics.